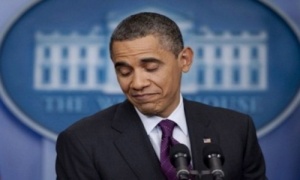 Yet this is quite a strange statement, though conceited as it was and coming as it did on the heels of surveys that show his approval numbers in record-low territory, and a Quinnipiac poll that rated him the worst President since World War II. And rightly so, for one has only to look around to see there are problems aplenty.

Let’s start with the economy. How could the President even begin to imagine there’s been any meaningful recovery from the financial panic that struck as he took office? The numbers for the first quarter of 2014 show an economy that shrank by 3 percent. One more dismal quarter and we will officially be in a recession. But as any right-thinking economist will tell you, a true depression has been with us since 2008.

According to the latest stats, there are now more than 92 million Americans out of work, those who have given up looking for a job, even as the administration says the unemployment rate has fallen to 6.1 percent. How can they say such things? By not counting those 92 million unfortunate souls. By any measure the economy is a mess.

How about the porous (to put it mildly) southern border? As we speak, thousands of illegals from Mexico and Central America are flooding Texas, New Mexico, and Arizona, overwhelming an already weakened border patrol. Some 70 percent of agents are now trying to house and process the torrent of illegals, not secure the border from further encroachments. And Obama will not call out the military to assist.

Since October of last year, some 60,000, many of them unaccompanied children, have reached American soil, and Washington is expecting tens of thousands more, with no end in sight. According to reports, some 95 percent of these illegals expected to receive “permisos” upon their arrival. Yet we hear from the administration that the “border is secure” and is more secure than it has ever been. Do they think we are that stupid? And do they think we have not figured out that this is Obama’s own doing?

This wave of mass immigration threatens our very livelihood in so many ways. A flood of cheap labor threatens the wages of low-paid workers, not to mention the jobs of those lucky enough to find one, which is why organizations like the Chamber of Commerce seek amnesty, to drive down their costs of doing business. They care nothing for the lives of American workers; only the bottom-line.

It also threatens to unleash a major health epidemic, as many of these poor migrants are covered in lice, riddled with scabies, and infected with tuberculosis, mumps, chicken pox, and even the swine flu. Border Patrol agents are now contracting these diseases at the many detention centers around the nation where the aliens are being housed. Washington has even gone so far as to threaten doctors who are attempting to warn the nation of these dangers.

Obama’s foreign policy has been nothing short of disastrous. The administration, sticking with its “everything is brighter” line, recently announced that there is “tranquility in the global community.” Where, might we ask? Certainly not in the Middle East, where Israel and Hamas are back at each other’s throats in a new conflict that threatens to grow far larger. Syria is still in shambles, as ISIS is beginning to grab parts of that war-torn nation, as well as vast swaths of Iraq, to form a dangerous radical Islamic Caliphate, whose leaders have already threatened the United States and is busy gathering components, including radioactive material, for a dirty bomb. And with our southern border as unsecured as it is, and with Islamic materials already discovered in the desert, it is a major cause for worry.

In Asia, China is becoming more and more belligerent with each passing day, with its eye on controlling the important South China Sea and its vast reserves of oil and gas. Standing in its way, though, is Vietnam, who is not taking the Chinese aggression lying down. Other nations, like the Philippines and Malaysia, are pledging to support our old foe, who is seeking help from us, to no avail. Experts worry that a regional war might be in the near future if measures aren’t taken soon. So where is American leadership in the region? On a five and a half year vacation it seems. China is already warning us to stay out of the dispute, and with this President, that seems quite likely.

Despite all this madness, our illustrious Leader, the hope of so many in 2008, has done nothing. Nothing except attend fundraisers – nearly 400 at this point in his presidency, while Bush had been to just 261. Nothing except take vacations. Nothing except blame the troubles on Republicans.

We must ask ourselves, are we still living in America or have we been “fundamentally transformed” into the Socialist Mecca of Obama’s dreams?

Yet there is a glimmer of hope on the horizon. Americans are beginning to awaken to the dangers and are fighting back, especially on the immigration issue, as thousands across the nation have physically blocked Homeland Security buses filled with illegals, preventing them from being offloaded in their towns. More and more state governors are telling Washington: “Not Here!” In Houston, and other cities across the southwest, enraged citizens, many of them black, decried the new arrivals who would most assuredly take their jobs.

But perhaps most surprisingly, it was the reaction of Obama’s hometown of Chicago that caught my attention, as angry citizens are rightly furious at the President for seeking billions to house and care for the illegals while ignoring them, as their city has become nothing short of a war zone. One fed up resident, a black man in the inner city, announced to television reporters that Obama would definitely go down as the “worst president ever elected.”

Such reactions prove the polling right. These outraged citizens, like millions of others, reside in reality, while our commander-in-chief has taken up residence in fantasyland. God help us all.